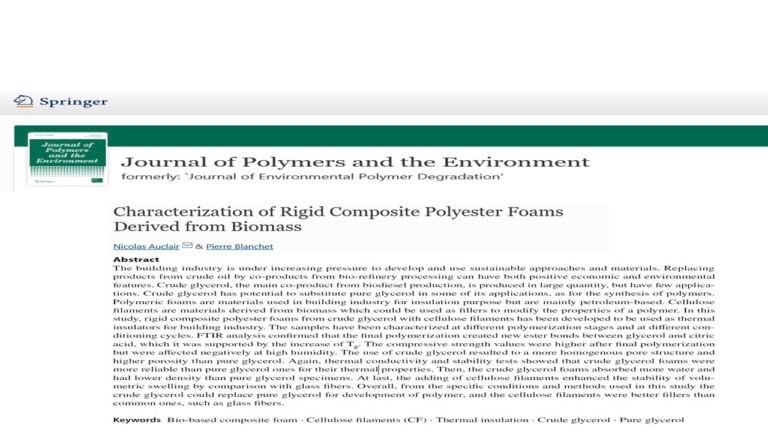 The building industry is under increasing pressure to develop and use sustainable approaches and materials. Replacing products from crude oil by co-products from bio-refinery processing can have both positive economic and environmental features. Crude glycerol, the main co-product from biodiesel production, is produced in large quantity, but have few applications. Crude glycerol has potential to substitute pure glycerol in some of its applications, as for the synthesis of polymers. Polymeric foams are materials used in building industry for insulation purpose but are mainly petroleum-based. Cellulose filaments are materials derived from biomass which could be used as fillers to modify the properties of a polymer. In this study, rigid composite polyester foams from crude glycerol with cellulose filaments has been developed to be used as thermal insulators for building industry. The samples have been characterized at different polymerization stages and at different conditioning cycles. FTIR analysis confirmed that the final polymerization created new ester bonds between glycerol and citric acid, which it was supported by the increase of Tg. The compressive strength values were higher after final polymerization but were affected negatively at high humidity. The use of crude glycerol resulted to a more homogenous pore structure and higher porosity than pure glycerol. Again, thermal conductivity and stability tests showed that crude glycerol foams were more reliable than pure glycerol ones for their thermal properties. Then, the crude glycerol foams absorbed more water and had lower density than pure glycerol specimens. At last, the adding of cellulose filaments enhanced the stability of volumetric swelling by comparison with glass fibers. Overall, from the specific conditions and methods used in this study the crude glycerol could replace pure glycerol for development of polymer, and the cellulose filaments were better fillers than common ones, such as glass fibers.